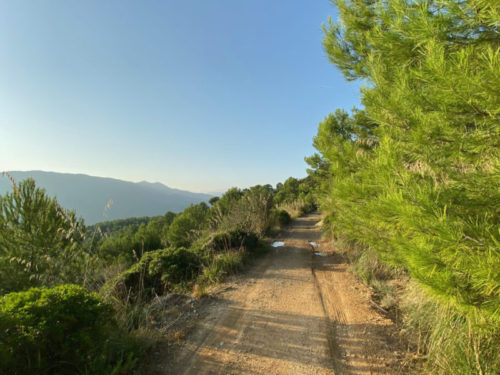 The hinterland of Andora offers one of the most beautiful panoramic paths in Liguria for those who love hiking. Ideal for nature and sports lovers, they are suitable on foot or by mountain bike. Those paths connect Andora to other cities and places, and they are perfect for exploring a different aspect of Liguria, which is not just sea and beaches.

The Municipality of Andora has invested heavily in safeguarding these routes, financing, cleaning, and making efforts to promote them.

The hinterland of Andora has numerous routes that connect Andora to other centers such as Colla Micheri, Stellanello, Testico, Rollo, or Laigueglia. They allow hours of activities in the countryside with panoramic walks: those routes have different difficulties and they are suitable for all needs and all ages.

The main ones are:
Sentiero Botanico di Mezzacqua: This itinerary starts from the center of Andora, from the ancient sixteenth-century tower. It passes through the ancient aqueduct, via Mezzacqua until it reaches Colla Micheri, the ancient village of Roman origin.
La via medioevale: An itinerary that largely follows the ancient medieval road linking the valley of Andora and the neighboring ones. It allows you to visit numerous centers of historical interest such as the Castle of Andora, the Church of S.S.Giacomo and Filippo, and the Roman Bridge.
Il sentiero di Rollo: This scenic route starts from Andora to get to the ancient village of Rollo, allowing you to visit the Church of S.S. Trinità and the fifteenth-century castle. The path allows you to continue until reaching Cervo.

For more information on the Andora hiking paths, you can visit these websites:
Andora Turismo
Comune di Andora

Any cookies that may not be particularly necessary for the website to function and are used specifically to collect user personal data via analytics, ads, other embedded contents are termed as non-necessary cookies. Those cookies can be deactivated by the user.